On the road, ATM feedback and cash in the future

Last week I spent some time on the road with one of the YourCash Regional Managers.  I was delighted to meet new and old customers alike and I enjoyed seeing the rapport the Regional Manager had with our merchants.

Having visited 7 sites in one day, the ATM is definitely a welcome addition to the businesses, and the feedback from the customers with ATMs was encouraging…it’s good to see that they are fully bought into the benefits an ATM brings them.

Further supporting the benefits of an ATM, one of our recent success stories comes from Marsh Lane Mini Market. The store previously had a surcharge ATM which was removed and YourCash installed a Free to Use ATM. Since the install in October 2012, the ATM has done c.2000 transactions and a large part of the ATM’s success is down to the promotion and support from the merchant.

Harjit Gill, the owner told us ‘‘The ATM is very convenient for my customers and they are pleased that they no longer have to pay a fee to withdraw their cash. I have noticed a lot of new customers coming into my shop to use the cash machine, instead of the one down the road as they don’t want to stand in the cold and rain to withdraw their cash.” At YourCash, we believe that the ATM can become a pivotal part of the merchants business and that customers will rely on the ATM.

The ATM will continue to have a place in our shops, garages, local convenience stores etc. certainly for the foreseeable future; Mike Lee of ATMIA recently advised that in 2009, 78% of all cash in the UK was sourced via ATMs. It’s predicted that by 2015 80% of all cash in the UK will be supplied via ATMs…so it’s pleasing to see the ATM will remain an important asset to our merchants and customers. 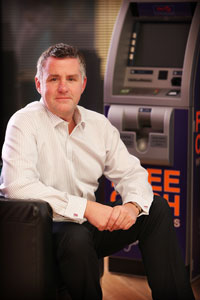