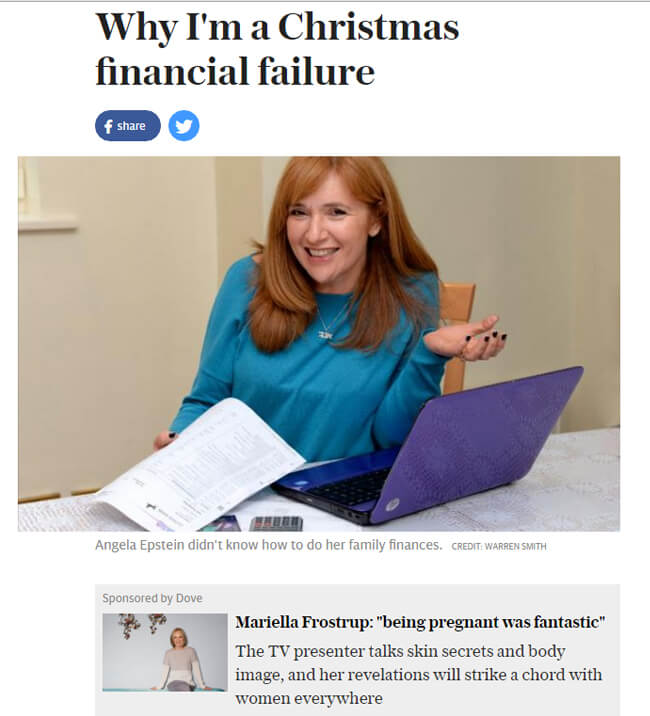 The Telegraph – Why I’m a Christmas financial failure

Jenny Campbell, YourCash CEO comments in Angela’s article on why women need to financially savvy in their relationships.

Jenny discusses how she had to take control while her husband Andy, an RAF NCO worked away from home and now that he’s home…

“I still am aware of what is going on with all elements of our family finances – including those areas Andy looks after. No one knows when they might well need knowledge of accounts they don’t usually handle. The key is having familiarity and visibility.”

How to save money whilst shopping

The whole point of shopping is that you spend money… but there are ways you can cut back on how much is spent. In this blog we’re going to teach…
Read more...
By YourCash
Share:
cash / Budgeting / Save / advice

Your store’s impression begins the moment a customer notices your store, then the second they walk through your doors, the journey begins. You want to engage them and make them…
Read more...
By YourCash
Share:
increase footfall / customer / business / business development / Success / advice / convenience stores

Women in business and the glass cliff – are they brought in to deal with crisis and set up to fail?

The glass cliff theory is something of a new-ish phenomenon… Michelle Ryan and Alex Haslam (professors at Exeter University) coined the phrase in 2005, further to their research on particular…
Read more...
By YourCash
Share:

Google launches Android Pay, but will it be able to compete? Our MD Ewan Ogilvie speaks to Share Radio on the launch of Google's Android Pay and the impact it…
Read more...
By YourCash
Share:

Do we really need another payment method? With the launch of Android Pay today –  Is the UK ready to adopt another 'tap and go' payment option or are we opening…
Read more...
By YourCash
Share:

Jenny Campbell, YourCash CEO talks to New Business about the value that cash brings to small businesses and it's necessity in the future.  With record levels of ATM cash withdrawals…
Read more...
By YourCash
Share:

The polymer banknotes countdown has begun... The Bank of England has spent the last 2 years prepping the UK economy for the launch of polymer banknotes.  Working with the relevant…
Read more...
By YourCash
Share:

A day or three in the life of an entrepreneurial CEO

I find myself rather “marooned” today in a beautiful hotel on Park Lane, with an unplanned gap in my otherwise hectic schedule, and a frustrating, but liberating technology problem where…
Read more...
By YourCash
Share:

VocaLink to manage the YourCash European ATM network VocaLink, the international payment systems provider, has signed a three year contract with YourCash to manage an ATM network of more than 1,000…
Read more...
By YourCash
Share: