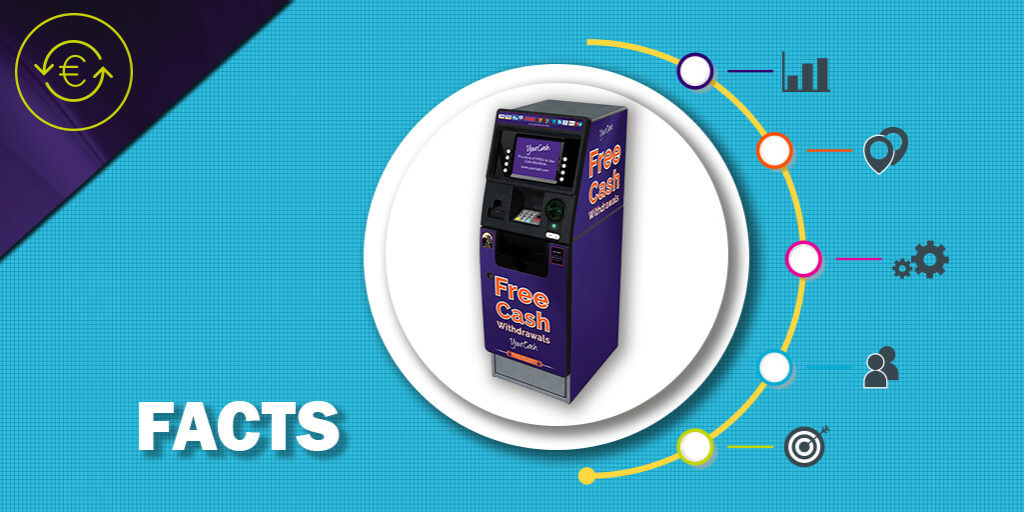 Since the moment it was built the use of an ATM has become very common and necessary. That’s why we think knowing a few facts about ATMs is an interesting conversation starter!

The world’s very first ATM was built and installed in a Barclays branch, in Enfield, in 1967. It’s always been debated around who actually invented the first cash machine, even today we’re still unsure! Check out this previous blog talking about each side of the story.

Though they are used every day, how much do you actually know about ATM machines? In honour of this glorious machine we are bringing you some interesting facts about ATMs that you probably didn’t know.

Well almost everyone knows about the first ATM but where was the second one? The world’s second ATM was installed in Sweden, just a few weeks after the Barclays ATM in 1967. Immediately it became a global success!

There is an interesting story behind the four-digit pin code we use on ATMs to access our cash. This is how the story goes… originally John Shepherd-Barron came up with a six-figure number. He consulted his wife, Caroline about his idea but she could only remember four digits. For security purposes banks in Switzerland and many other countries require you to give a six-digit pin. Could you remember a six-digit pin?!

If you thought ATMs only dispensed cash, you’re wrong! The first gold-plated machine was placed in the lobby of the Emirates Palace hotel in Abu Dhabi and dispenses 320 items made of gold. Currently there are twenty gold vending machines installed across three continents.

Not to mention the water distributing ATMs that have been a recent success in India.

Wait… what? A floating ATM? It’s simpler than you think… it can be found in Kerala, India. The State Bank of India has installed it on a ferry which is owned by Kerala’s Shipping and Inland Navigation Corporation (KSINC). The ferry famously known as Jhankar sails between Ernakulam and Vypeen, the most densely populated area in Asia.

Friday see’s the most cash withdrawals. Can you blame it though? Party weekend anyone?

One of the most important features in an ATM is its password safety. In Brazil, such features include biometric ATMs for secure banking transactions.

The World’s highest ATM counter has been installed at a height of 16,007 feet above the sea level. It is installed by The National Bank of Pakistan at the Pak-China border called Khunjerab Pass. And it holds the world record in Guinness Book for the world’s highest ATM.

The loneliest ATM in the world is in Antarctica. There are two ATMs located in the US research center McMurdo station in Antarctica. Where one ATM acts as a backup and at a given point of time only one ATM works.

ATMs became popular in the 80’s, and now there are over three million ATMs around the world, including one as far away as Antarctica. Do you want to know a fun fact? ATM’s are installed every three minutes.  According to Smithsonian reports, in a world before ATMs people didn’t bother much with bank accounts. Do you know why? Because they received their salaries in cash and paid their bills with cash too. But then along came ATMs making banking far more convenient and efficient.

If you take a moment to visualise an ATM, you can clearly picture the machine with its gray or dark colored exterior, black accents and LCD screen. It’s typically a simple design that can be identified by just a glance but what if you could take it to another level and make it really stand out to benefit your business?

This is where an ATM wrap comes into play! Imagine an ATM that has a vibrant and colourful design that excites the eye, not only to the ATM, but the entire environment it’s in as well.

ATM wraps are a fun way for businesses to put their spin and brand on an ATM. A branded ATM at an establishment shows your customers that you mean business.

ATM wraps will help your business because people will notice the ATM which then presents the opportunity for the potential customer to check out everything else surrounding the machine.

YourCash gives its clients the opportunity to have customised wraps according to the brand style. Providing customers with an onsite ATM is just the first step toward improving customer service and increasing revenue.

Did you know that an ATM can increase foot traffic and sales? In fact, an ATM in a convenience store increases basket spend by an average of 65%. If you would like an ATM for your business, contact us today or call us on; 0800 032 0707.

How many of these facts about ATMs did you already know? Tweet us or leave us a comment on Facebook. It’s always great to hear your opinions.

Your store’s impression begins the moment a customer notices your store, then the second they walk through your doors, the journey begins. You want to engage them and make them…
Read more...
By YourCash
Share:
convenience stores / increase footfall / customer / business / business development / Success / advice
/ Switch

Why is a cash machine a smart business solution? Hi there, we’re YourCash, and we provide ATM services that have been developed to suit all businesses all over Europe. We’re…
Read more...
By YourCash
Share:
Switch
/ Switch

Most valuable retail investment for a small store.

How well do you use your stores space? What if we told you we could let you in on the most valuable retail investment for a small store? Let’s discuss…
Read more...
By YourCash
Share:
increase footfall
/ Switch

Since the moment it was built the use of an ATM has become very common and necessary. That's why we think knowing a few facts about ATMs is an interesting…
Read more...
By YourCash
Share:
/ Success

More money in your pocket: Making an ATM more profitable

What retailers don’t often realise is that a few simple steps can turn an ATM into an additional money-making machine. To find out how to make an ATM more profitable,…
Read more...
By YourCash
Share:
increase footfall / business / Success
/ Save

We’re going to walk you through 7 of our easy steps to increasing footfall in your store! With increasing footfall you firstly need to understand foot traffic, which is one…
Read more...
By YourCash
Share:
YourCash / Success / access to cash / increase footfall